3D printing can be a real pain. You’ve got so many printer variables to set up it can feel like you’re sending a rocket to Mars. And you’re either stuck at the printer with a USB cable or you’re getting no info about your current print, because you’re using an SD card to print your miniature Millennium Falcon. So painless, even enjoyable 3D printing just almost sounds too good to be true. Dutch-based startup Printr is making it a reality though. Not only on the hardware, but also on the software side.

Everybody knows printing in general is just a horrible experience. 3D printing is even worse, because most companies see 3D printing as a niche market for professionals only. Printr sees things differently and wants to streamline the 3D printing experience, both for the abovementioned professionals and every average Joe and Joelene as well. With FORMIDE, they already offer a 3D printing cloud platform for schools, makers and offices on which everybody can log in and manage multiple printers, projects and users for greater productivity. Their new piece of hardware makes the experience even better: the Element provides for a way get the info on your current print, without being stuck at the printer with a USB cable. That’s because it streams STLs or Gcode generated from any slicer (the tool you need to convert your file into instructions or say slices) directly from your device to your 3D printer, both locally and through FORMIDE. To complete serving everyone in every situation the next step is Katana, a free 3D printing app everyone can download to simply start printing without having to use the cloud, for individual users.

Printr had several reasons to build Katana. One of them is to serve their customers across the board. Another is for easy onboarding to their other products. But the main reason is because the experience of 3D printing until now just sucks. Printr wants to fix that. Since UX-fixing is sorta kinda our thing, this jumpstart was a perfect match. So, in just one week of only, we built Katana, together with the Printr team. But not only that: next to coding the app we helped them with the typical startup struggles. We introduced their team to the Q-way of working together, helped them polish their ideas about 3D printing, assisted in increasing the viability of their product, tested Katana with objective testers and thought along about the steps they should be taking next. So in other words: a jumpstart isn’t necessarily only valuable for the viability of your product; it can help jumpstart your whole business as well.

For Katana we used Node.js and Angular, because Printr’s finished software was built with it too. To turn it into a desktop app, we used Electron. Two steps of Katana were already finished and could simply be tied together, because Printr provided us with their powerful slicer software and 3D viewer. So we tied it together and built the remaining steps of the app.

Upon starting the app, you first choose your printer. Printr already created profiles for different printers, to make your life a little easier. The next step we built is selecting your 3D model. You can do that by selecting a file on your computer or you can just drag and drop it. Then Printr’s 3D viewer follows. In this viewer you can edit your print any way you want to.

Then it’s time to choose the material you will use and which quality and speed you want to print at. Because of the printer profiles Printr already generated for you, you don’t have to set up any variables yourself. But because our testers expressed the wish to still be able to control those during our jumpstart, you can still click the manual controls and tweak the variables to your own desire. We generated the duration of your print by calculating the quickest one in the background of the step before. With this information we can calculate the duration of all print qualities in this step. Then, when you’re ready, it’s time to press print or save your print job to an SD card. When you choose ‘print’, Katana keeps you informed about printer status and duration. After the jumpstart Printr was ready for their next step: building support for the Element too.

We helped Printr with coding Katana, but to be honest they could have done that by themselves too. Their team is not at all short on geniuses. So with coding Katana and steering towards a new fresh interaction design, we’ve mostly helped them keep their app simple by offering a fresh pair of eyes on their product. We helped them to build a prototype in just one week and introduced them to our way of working. We’ve really enjoyed spending the week together in one room. Because working that close together made it possible for Printr to improve their code immediately on subjects that weren’t finished yet or simply not thought about before building Katana with its own specific use cases.

By using it as an accelerator for their business Printr proves jumpstarts aren’t only for established companies, but extremely valuable for startups too. With their vision, hard- and software, talented team and this jumpstart experience we believe nothing is holding Printr back to take over the 3D printing world. 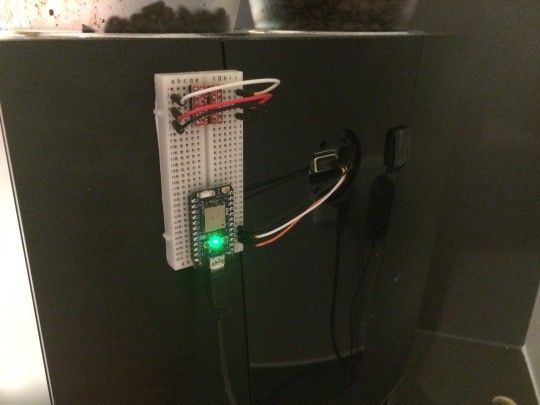 How we hacked in our coffee machine to have it tell us how many cups of coffee it made.

Until recently I’ve mostly been working on the Android app for our client PostNL (the premier provider of postal and parcel services in the Netherlands). 3 months back I